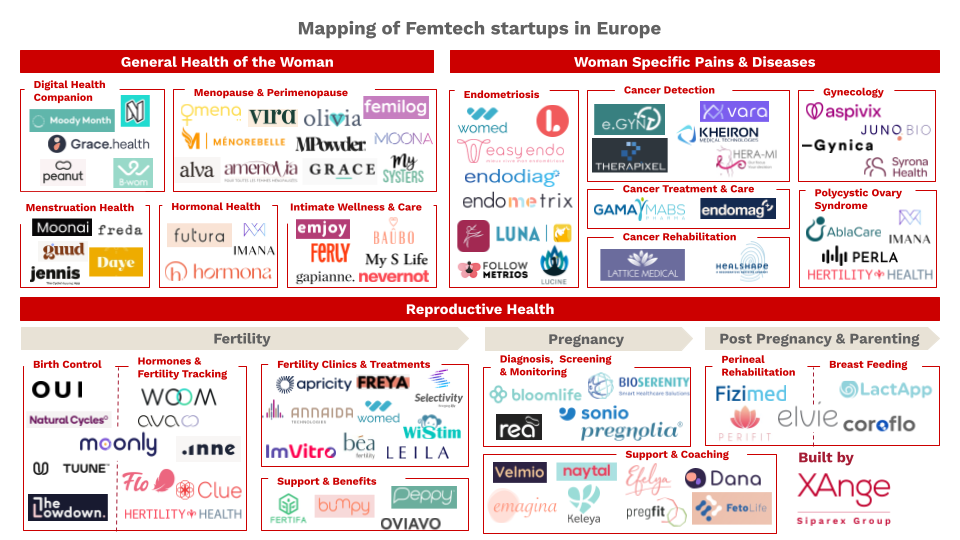 In the 70’s, while representing half of the world’s population, women were excluded (by law) from clinical and drug trials because of their contraception, hormonal cycle and potential danger for a future pregnancy. Therefore, and despite women and men being biologically different, the dosage of drugs was calculated for men. As a result, women suffer from adverse drug reactions nearly twice as much as men, mostly because of a higher concentration in the blood and longer evacuation.

Since the beginning of the 90’s, the inclusion of women has been written in the law but their specific diseases and pains remain too unaddressed. For example, we know that women experience migraines as much as three times more than men, but we still do not precisely know the causes and how to cure it. Endometriosis is a disease affecting more than 180 million women in the world and yet underdiagnosed by the scientific community. It just started to make its way into the public debate (French President Emmanuel Macron launched a national health plan on endometriosis in January 2022).

The term “Femtech” was coined not so long ago in 2016 by Ida Tin, co-founder and CEO of Clue, an app for women to track their periods and fertility cycle. Ida came up with the term Femtech to designate all technologies dedicated to women’s health and wellness. It ranges from softwares (mobile apps, platforms), technologies (AIs, big data) to devices (tech enabled products, wearables, sensors).

The founder of Clue also wanted to give visibility to these startups often penalised and underrepresented because of taboos:

“I went on to coin the term ‘FemTech’ as a way of helping to legitimise the female health tech market, thus driving forward innovation, attracting investment, and helping to normalise conversations about female health.” (Ida Tin)

Startups are booming to support women throughout their life

Driven by (women) entrepreneurs, the Femtech market is currently booming and expected to reach $50B by 2025. Today, there are more than 807 Femtech companies in the world, 208 of which in Europe (Pitchbook data).

Since then, the market has been booming to tackle diseases and pains too unaddressed by medical professionals or still considered  taboo by many, like menopause, endometriosis, POCS, post partum and sexual wellness.

We believe the next wave of Femtech startups are and will be the ones taking the biggest market size for the longest time, addressing the whole health cycle of the woman:

We expect startups to extend their proposition value with the aim to bring complete solutions for women’s health. In a few years, the segments of our mapping will all be overlapped!

An underrepresented space on the investment scene

Globally, 2021 was a pivotal year for Femtech. According to Pitchbook, capital investments in Femtech surpassed $1B for the first time this year. 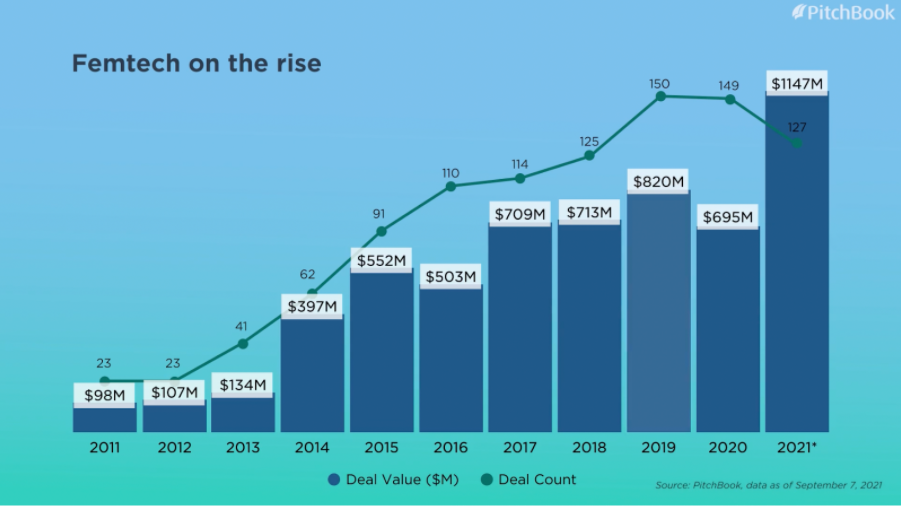 It’s only the beginning!

The next normal for women health: data and personalisation

With Femtech, we are not witnessing the boom of a trend but the beginning of the future of healthcare dedicated to women.

We believe data is the biggest growth opportunity for Femtech startups: health data will help to fuel research about women’s diseases and pains ; women’s biology will be better understood ; new treatments will be found ; Femtech solutions for women’s health will improve. Data will be a virtuous circle for women’s health, as long as businesses comply to GDPR (General Data Protection Regulation) and that the collection of the data is super explicit for the clients.

In addition to fostering research, we believe data will enable a next gen of Femtech based on personalisation and daily health monitoring. This data-driven approach has already made the success of one of the most valued Femtech startups in Europe, Flo Health, with its $50M Series B last September. Flo Health uses biological data and AI to predict periods and ovulation and to give personalised insights to women based on their symptoms.

A giant unaddressed and tech-driven market enabling to encourage the representation of women in entrepreneurship and investments: the potential of Femtech is too big to be considered as a trend. It will be the next normal!

You are a Femtech founder and you would like to reach out to us? Your startup does not appear on our mapping ? Contact Victoire Serreau at victoire.serreau@xange.fr